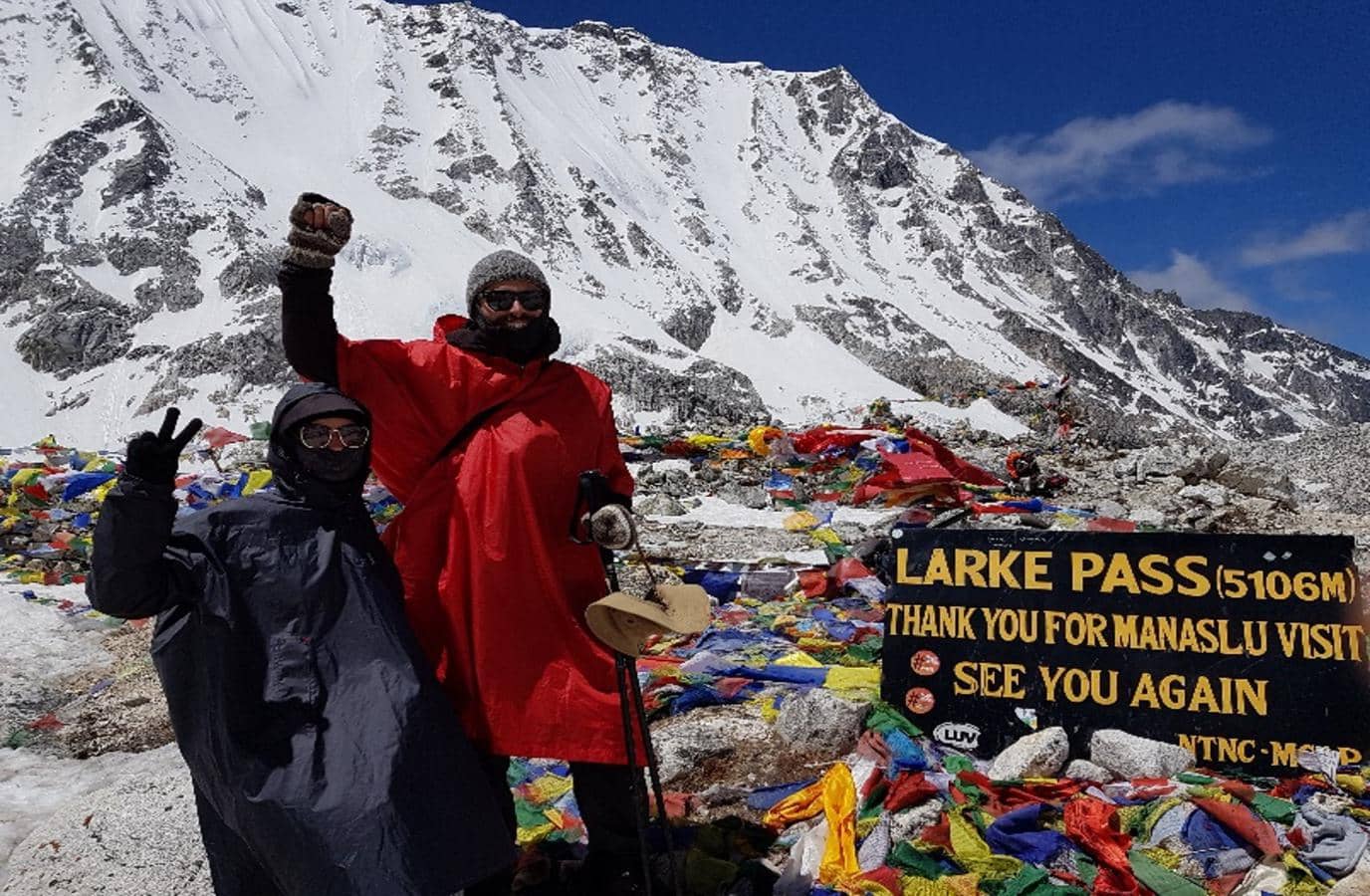 The plane arrived in Nepal without planning, we strolled through Kathmandu looking for a guide for the Manaslu Circuit. It was important for us to meet the organizer personally in order to understand how the costs of the trip are composed, what experience he has and where the qualifications of his employees lie. Ultimately, we found ourselves in the best of hands with Puru – www.myeveresttrip.com

Day 1: 7 km – Arughat Bazaar (500 m) – Arukhet (700 m)
The goal was to reach Soti Khola by bus. Unfortunately, there were too few guests for the bus driver, so he stopped driving from Arughat Bazaar. Well, then just on foot. The goal was Arukhet. About 7 km later and totally overwhelmed by the heat, we arrived. The path was very flat and well developed. The vegetation reminded me of Vietnam, and so did the temperature.

Day 2: 20 km – Aruketh – Machha kholagon (700 m)
The day starts with coffee in a Smilie cup and porridge. That was also necessary. The day was very intense because the 20 km had to be climbed up and down about 500 meters in altitude. But the valley was beautiful, it was wide and full of broken stones. A very monotonous day – colored in gray, but very fascinating.
Our guide Yam-who had trained as a cook in England – organized some fish and swung the wooden spoon. Fried Rice with Vegetables – mhhh.

Day 3: 16 km – Machhakholagon Jagat Bagar (737 m)
Rain – that defined this day. The pancakes for breakfast couldn’t comfort us over the constant rain. One of the toughest days for us. The valley narrowed at the beginning and then widened. A big Plato full of “Bush Weed” greeted us. However, it was the wrong time of year, so we continued to the hot springs in Yuru Khola. However, we decided to take a coffee break with Snickers instead of taking a bath, it was 400 rupees easier. The last few meters to Jagat led over a steel platform that, installed at the foot of the mountain, followed the river. In Jagat, we treated ourselves to a hot shower for a small surcharge.

Day 4: 19 km – Jagat Bagar Dengi
Mountain uphill, that’s fun. The condition definitely got better. The body had gotten used to the daily march. However, weak points could be identified. Left knee & right toe.
The day felt a little easier than day 3, which was definitely thanks to the good weather. The vegetation became lighter, there were only a few trees to be found, but many bushes. The food was a lot simpler than in the valley – Dal Bhat dominie.

Day 5: 16 km – Dengi – (1,800 m) – Namrung (2,650 m)
A very pleasant day as it consistently went uphill. We passed Ghap at noon. A small town whose houses had been destroyed by the earthquake. The new houses had wooden bracing. Originally the Nepalensis was built exclusively from stone. In the evening we couldn’t believe our eyes. When we arrived in Namrung, we thought that the first gate belonged to a monastery. But it was an accommodation ☺ We checked in immediately and had better accommodation than in Kathmandu itself. In the high season, there is even a sauna room. Definitely, the best place to stay on the trip. Yam cooked again – self-made momos – the biggest and best we have ever had.

Day 6: 17 km – Namrung (2,650 m) – Samagaon (3,600 m)
Unfortunately, we had to move out of our small temple. The path was shaped by a forest landscape, it reminded us of the local forests. During lunch in Lho, we spotted the local monastery “MonasteryofLho”. The switchbacks are definitely an extra task, but definitely worth it. The only real monastery that we saw on this trip. It was badly damaged by the earthquake and was currently under construction. On the ground around the monastery, there were many protective symbols – apparently, they had worked – the main complex had remained undamaged. When we arrived in Samagaon, we took the last accommodation, the daughter of the house played the cook for us.

Day 7: Samagaon rest day – temple
Actually intended as a rest day, but when do you come back to Nepal? With tired bodies and too little sunscreen, we went looking for the “Pung Gyan Gompa” monastery. Unfortunately, the “monastery” was disappointed as it turned out to be a row of huts with blue tin roofs and 3 crumbling stone houses. The monastery brothers were apparently forbidden to carry out restorations. But the climb was wonderful. A sea of ​​flowers greeted us in a pass. This was followed by an endless plain on which a horde of yaks grazed – surrounded by snow-covered mountain peaks – a dream – a half-day trip.

Day 8 – Day 9: 8 km – Samagaon (3530 m) – Samdo (3875 m)
Rested, we hiked along the Budhi Gandaki to Samdo. The landscape became significantly bare. Only a few trees could be seen, the river narrowed – we were getting closer to its source.
When we arrived in Samdo we decided to rest for the rest of the day – we had found a tea house that had a beautiful winter garden. Time to linger on the previous experiences. Hikers who come from Tibet also meet here. It’s less than 2 hours to the border.

Day 9: Rest day in Samdo
Day 10: 6 km – Samdo (3875 m) – Larkaya Phedi (4460 m)
Slowly the mountain air became noticeable. None of us have ever been higher than 2,900 meters. A new feeling – here the air is thin and the rest during sleep is less than usual.
The greatest challenge for us was the reduced hygiene in Larkya Phedi. It is a camp, which means 6 tent sites and 6 stone houses. The water is taken directly from the stream. Unfortunately, the water boils at this altitude at 85 ° C – the result was stomach pain and a lack of hunger at dinner.
The panorama more than made up for it the next day.

Day 11: 15 km – Larkaya Phedi (4460 m) Larkaya La (5213 m) Bimthang (3590 m)
Today is the day of the pass, it starts at 5 a.m. 5213m and a walk of about 12 hours is ahead of us. The last few days have drained our nerves and strength, but we are willing to overcome the last hurdle. It’s cold in the shadow of the mountains, I have to keep moving my hands despite my gloves because they hurt from the cold. At around 8 a.m. we reach the first rays of the sun. The ascent is strenuous, after about 3 hours we are only walking through snow. Unfortunately, the footpath is not visible, so I crash into the snow up to my stomach. Everything went well. Every step becomes slower, the forces no longer seem to be sufficient. The thoughts of breaking off are growing. However, since our guide would have to walk 8 hours to the nearest telephone for a rescue helicopter,

We continued with heavy steps. The sun was laughing, the motivation was limited. But the landscape was breathtaking. We walked the last few meters on the Manaslu Circuit which meets the Annapurna Circuit in the village of Thoche.
On this mountainside, the food is definitely more varied, as the villages are very easy to get to – there was cheese again.

Day 12: 13 km – Surki Kohla (2700 m) – Dharapani (1860 m)
The path is much more pleasant than on the other side of the mountain. The paths are wide, the vegetation lush, the sun smiles at us and we put one foot after the other.
When we arrive in Dharapani, we follow the path so far and decide to have a small party in the garden – one of the best trips we’ve taken so far!

Day 13: 15 km – Dharapani (1860 m) – Jagat (1300 m)
The last day of walking. Village after village is lined up, which are now connected to each other again by roads. Civilization has us back – the cell phone has reception again – unfortunately.
Thanks to everyone who made this trip possible, especially to our two companions Yam and Mama – without you, it would have been only half as much fun.
Many thanks also to www.myeveresttrip.com – Puru the organizer, also has a wonderful Hotel and is happy to help send treasured souvenirs to Germany.