Bhutan, the happiest land in South East, is officially the Kingdom of Bhutan. This landlocked state in South Asia is located at the eastern end of the Himalayas. Bhutan is bordered to the north by China and to the south, east, and west by the Republic of India. Further west, it is separated from Nepal. 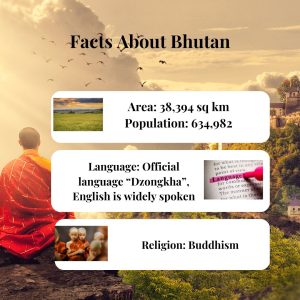 Bhutan promotes eco-friendly tourism which operates under the control of the central Bhutanese Government. This means, that independent traveling is not allowed in Nepal and you must book your Bhutan Travel package with a trusted travel agency in Nepal. And only after having your tour to Bhutan booked, can you get your Visa for Bhutan. Also, the cost of traveling, and the facilities you get are pre-defined by the government. In terms of expenses, the cost of a Bhutan tour is the highest among the South Asian country, however, the price is worth it. A large portion of your cost of Bhutan travel goes for

Nepal to Bhutan tour can be a short as well as rejuvenating experience in the mystical land of Buddhist culture. And you will definitely be happier after the Nepal Bhutan tour because According to a global survey of Business Week in 2006 Bhutan has been evaluated as the happiest country in Asia and the eighth-happiest nation globally.

Bhutan is the last stronghold of Vajrayana Buddhism, about 75% of the population is Buddhist. Seen as a paradise with untouched natural beauty and ancient old culture and tradition, Bhutan is very peaceful and almost crime-free. Beggars and the homeless hardly exist. Sales of tobacco are prohibited. So does smoking in public areas. You will be amazed by Bhutan’s’ free education and healthcare system. Even in the case, that specific hospital treatment is not available in Bhutan, the patient will be referred to a reputable hospital abroad. As a result, it is widely depicted as a living Shangri-La in modern days. Every year only a few fortunate tourists are granted entry visas; where they will not only be enchanted by Bhutan’s untouched natural charm but also impressed by its stronghold of ancient old culture and tradition.

Traveling from Nepal to Bhutan 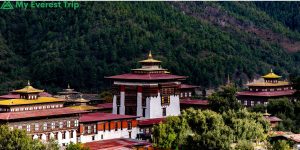 Further, there is two other entry point to Bhutan i.e. Gelephu and  Samdrup Jongkhar. However, the Jaigaon – Phuentsholing border is more popular due to easy permits and quick access via road.

We are eco-friendly Trekking and Tour operators linked with the travel agency of Bhutan. We offer 3 night 4 days Bhutan Tour, Best Western Bhutan Tour with Druck Path Trek. We are committed to making your Bhutan tour fun as well as safe.

This Short Helambu Trek 3 day is for an easy and comfortable journey to the Langtang region in the central north of Nepal.

In your view, what should an ideal vacation look like? Let’s imagine a place that has a great mountain range in the back, a lush evergreen forest in the front, a cascading river, and a stunning waterfall in the way. Also, imagine a place with traditional people living in colorful villages and a cultural heritage…