Tibet, an autonomous region of China, reflects the peaceful atmosphere and classic style of living; you get to have that once-in-a-lifetime experience. The vast tracts of this country are protected to give you the perfect, unspoiled wilderness of crystal-clear lakes, high mountains, and beautiful valleys, making for a perfect Tour to Tibet.

Although Tibet is one of the most ancient, mysterious, and fascinating must-visit destinations, it was only recently introduced to the western world and tourists. Tibet is located in the southwest frontier of China. Tibet covers a total land area of 1.22 million square kilometers. With an average elevation of 4500m and housing the overwhelming beauty of the world’s highest mountains, Tibet is regarded as the roof of the world. 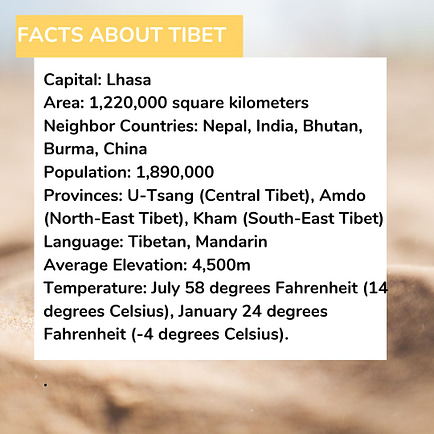 Tibet is divided into three geographical regions, the East, North, and South. The Eastern region is mainly forest, occupying approximately one-fourth of the total land. The Northern region is an open pasture where nomads, sheep, and yak inhabit. This region occupies approximately half of Tibet. The Southern and central region is mainly agricultural, occupying about one-fourth of the total area. The Geography of Tibet looks similar to that of the Upper Mustang

The majority of the Tibetan population are Tibetans. These people of the trans-Himalaya also have their own language called Tibetan and Zhang Zhung.

During your visit, your heart will be warmed and touched by the big smile and strong spiritual faith of the Tibetan people. The major occupation of Tibetans is farming and husbandry. Farmers produce barley, wheat, peas, and grape seeds. As the Northern half of Tibet is covered by grasslands it is the home of nomads, yak, and sheep.

Religion and spirituality are extremely important to Tibetans and have influence over all aspects of their lives and are deeply ingrained into their cultural heritages. Bon is the ancient traditional religion of Tibet. The most important heritage of Tibet is Mount Kailash and  Mansarovar Lake.  They are equally important for Hindus, Buddhists (Mostly Bon), and the Jains community. While Hindus attach this region to Lord Shiva, Buddhists think that Kailash is home to the Buddha Demchok. When you travel from Kathmandu to Tibet, you can see all these changes in culture. 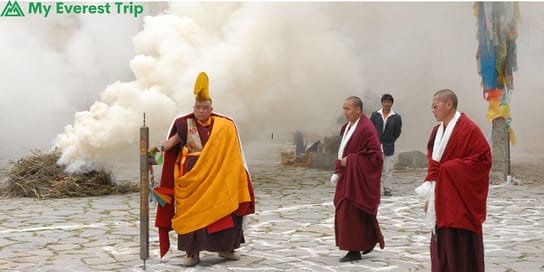 In Tibet, there are festivals such as Saga Dawa. Tibetan New Year is celebrated in February, and there’s also a Peach Blossom Festival. In July, Tibetain people celebrate Tashilhunpo Thangka Festival around the lower area. Also, there’s Gyantse Horse Racing Festival which is celebrated with great excitement. Also, there’s the Harvest Festival.

The climate in Tibet

Despite the high altitude of the Tibetan Plateau, the daytime temperatures are actually quite mild. Between April and November, the average temperature can range from 14-25 degrees Celsius and the skies are generally clear and blue. From July to August there can be an odd shower during the day. The nights, however, can be very cold and temperatures can drop below 0 degrees Celsius. There’s not much change in weather while going to Tibet from Kathmandu for Indians.

Spring (April-May): The ice melts and the weather warms up during spring.
Summer (June- August): The weather is cool in the summer and it is the best travel season of the year.
Fall (September-October): The weather is cool and the sky is clear during fall. It is a pleasant time to hike and trek in Tibet. You can also capture beautiful mountain peaks in this season.
Winter (November- March): Tibet experiences heavy snow in winter, especially in February and March. Due to the heavy snow and blocked roads, entry for foreigners is usually closed.

The best time to travel to Tibet is from May to October, when the weather is not very cold, averaging above 10 degrees Celsius. This is naturally the busiest travel time in Tibet tour when people come for the warmer weather and higher oxygen content.

Our Tibet tours will take you to explore the awe-inspiring Himalayan mountain views and beautiful culture in this high land of mystery. However, travel in Tibet comes with some complex permit requirements. My Everest Trip will guide you throughout the application process.

If you are interested in joining us on a Tibetan Tour, here are the tours that we can offer you. If you need more information, please Contact Us.

When it comes to extreme activities, peak climbing in Nepal is right up there. There are several reasons why people climb mountains. Thrill-seekers looking for an adventure want to push themselves, and although some climbers are motivated only by a need for adrenaline, for others, the urge to scale Nepal’s highest peaks has been building…

Once you’ve done the Everest base camp trek, the next most popular trek in the world is the Annapurna trek in Nepal. A goddess in Hindu mythology, “Ma Annapurna,” whose name means “full of grains” or “giver of sustenance,” is said to have given the peak its current name. The Annapurna Base Camp Trek is…

A complete guide to trekking in Everest region

There are many treks across the globe, but none more well-known than the one to EBC. Trekking in the Everest region is the most exciting and unique adventure available. Reaching Everest’s base camp is more than just a hike, and the mountain itself is more than just a symbol. A trip to Everest Base Camp,…