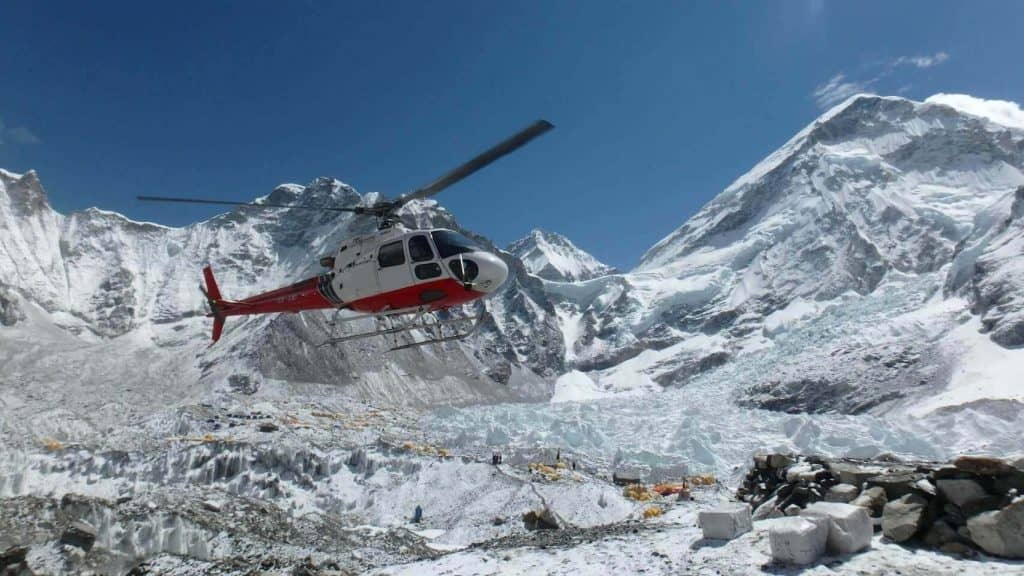 Imagine flying above the Himalayas range in a small aircraft and being surrounded by mountains in all areas. The foothill to the world’s tallest mountain is itself the most beautiful destination in the world. The tales of yeti and stories of saints who have found salvation in the mountains might not all be true, but the Himalayas of Nepal are the place where the soul meets nature. Everest base camp is the mountain climbers’ starting point and the endpoint. On this Everest Base Camp helicopter tour with Landing, you get to savor the utmost adventure of nature and enjoy the most scenic tour in a single moment.

On this journey, you can witness many world’s tallest mountain peaks, including Everest, Mera, Lhotse, Cho Oyu, Makalu, Kanchanjunga, and more. Along with such incredible mountains, you also see villages such as Nagarkot, Jiri, Namche Bazaar, Tengboche, and Dingboche, all shining with colorful tea houses. Also, one can witness Tengboche Monastery, Edmund Hillary School, museums, and local farms.

Everest base camp is open for trek and mountain flight throughout the year; even during the harsh weather, adventure seekers head to the Everest base camp. However, Autumn and Spring are the busiest months, often crowded with tourists worldwide. Autumn is also the best time for the Helicopter tour when the views of the Mountains are most clear. Spring with an awesome shining of Rhododendron in the sub-tropical forest can also be a good season.

However, winter is even more exciting with snow in almost places above Namche. The entire Everest Base Camp is covered in a white blanket, with the Mountain Panorama all glittered in a thick layer of snow. Summer (June, July, and April) might come with occasional rain and unclear views of the sky, so a summer Everest base camp helicopter tour with landing is not recommended.

Why Everest Base Camp helicopter tour?

For elderly and young people: Everest base camp helicopter is allowed for people of all ages. With the higher altitude and remoteness of Everest Base Camp, trekking with seniors and children can be really difficult. However, with this Everest Base camp helicopter, they do not need to compromise on seeing the world’s best view; the Helicopter flies children above 5 yrs. to adults above 100 yrs.

For people with poor health: People with any kind of physical and mental illness should not be traveling in the remote land of Everest, especially if they are a patient with lung and heart problems. However, you cannot let a disease come into your dream of witnessing the world’s highest peak and the panorama of Himalayan vistas. So, get your Helicopter to Everest Base Camp booked today.

For short transit: The entire Mount Everest helicopter tour can be completed in less than four hours. You shouldn’t be worrying about pre-booking as MyEveryTrip takes last-minute bookings for people traveling to Nepal for a short time. So if you are coming to Nepal for a meeting/ seminar or this is just a transit when you are traveling to other countries like Tibet, Bhutan, and India, you can still see Everest without any preparation.

For special occasions: Either it is a special day like valentine’s day, new year/ Christmas or you might to planning to propose to your loved one, you always want it to be magical. However, you might not have over a month to plan your trip to Nepal. Then, this Mount Everest helicopter tour is a great way to express your love and have a wonderful day on the mountain.

Fine newbie travelers: A helicopter tour might be a short trip to Everest, but the weather on Everest will still hit you hard. So, make sure you pack your bags well, keeping warm clothes and some food. You will need the following things to wear or carry during the Everest Heli tour.

Can you visit Everest by Helicopter?

You should know that there are two Everest Base Camps. There’s the one in Tibet which is accessible through the road for some months of the year. However, due to the strict tourist Visa policy and the high cost of traveling from Tibet, is it less popular. So, most trekkers prefer to visit Everest Base Camp in Nepal which is only accessible via trek or via Mount Everest Helicopter flight. Trek to Everest, as you know is quite physically demanding and equally exhausting. Without a doubt, a Helicopter flight to Everest is the most luxurious and magical vacation ever.

So, yes, you can visit Everest by Helicopter. However, you should know that there are two kinds of flight. The first kind is the mountain flight to Everest which flies you over many Himalayas ranges in the Khumbu region, bestowing the most spectacular view. The second one is a Helicopter flight to Everest which includes three landings, first at Lukla, then at Everest Base Camp/ Kalapatthar, and finally at Everest View Hotel. This kind of Heli flight to Everest lets you enjoy the view while also allowing you to live with the Mountain vistas all around. You will get to click the awesome pictures and make wonderful memories even during such a short time.

In short, yes you can easily go to Everest Base Camp by Helicopter in less than 4 hours and enjoy the most spectacular view of the world without having to shed a drop of sweat. Sounds fun, doesn’t it?

Can Helicopter fly over Mount Everest?

Here, we have been talking about flying a helicopter to the Everest base camp. This doesn’t mean you cannot fly to the summit of Mount Everest. Helicopters can easily fly up to camp 2 which lies at 6,400 meters. High altitude Helicopters are designed to fly over 40,000 feet and Mount Everest’s summit is only 29,000 feet. This means you can all take a helicopter above Everest and get a bird high view of the World’s highest Panorama. However, landing above Camp I is very difficult due to the low air pressure. Although landing a helicopter at Everest has been done to keep the world record, it’s not recommended as the flight will be extremely dangerous.

So, as you can see, MyEverestTrip has been launching a very neatly arranged Mount Everest Helicopter tour Itinerary that’s been managed by an expert guide to Everest and experienced pilots. You can trust us to make the best trip of your time.

How much does it cost to take a Helicopter to Everest Base Camp?

So, “How much does a Helicopter tour of Everest Cost” is also our most frequently asked question. One might be shocked to know that Cost of the Everest Helicopter tour is actually cheaper than the Trek cost to Everest Base Camp.

In general, Everest Base Camp Helicopter tours cost from $1000 to $1100 per person. When you make the booking in the larger group then the cost comes out to be smaller.

The Price of the Everest Base Camp Helicopter tour depends on:

A Helicopter used for high-altitude flights can accommodate about 5 people (not weighing more than 500kgs). When you share the Helicopter in such a way, the cost comes out to be cheaper i.e. about USD 1000 per person. A common Everest Trek Package of 13 days costs about $1500 and then there will be personal expenses of about $500. Now, you can decide which you should choose.

When people are traveling with their loved ones or family, they wish to keep the helicopter flight to Everest peaceful and intimate. That’s why they book the entire helicopter instead of sharing it. Without argument, hiring an entire Helicopter to Everest represents the utmost form of luxury, but it is obviously expensive.

A helicopter charter to Everest in Nepal cost about $4000 to $4500 depending on group size. The includes the charge to pilot, fuel, insurance, and even a guide if you want to have one. The only additional cost with be for your breakfast at Everest View Hotel.

Note: Helicopter cannot land at Kalapatthar with more than 220 kgs. So, if your Helicopter has more than 5 people, it will be divided into two groups from Lukla and the helicopter will take two shuttles (trips) making 2 groups. Also, you should know that the cost includes all expenses of the trip except for the breakfast at Everest View Hotel.

Is the Everest base camp helicopter tour safe?

MyEveretTrip uses a powerful high-altitude commercial helicopter to fly over Everest. Our helicopters are new and a detailed inspection will be done after each flight. We only fly when the weather is clear and postponed the flight in bad weather. We even have a refund policy if the flight has to be canceled due to bad weather are any other natural calamities. The pilot flying our Helicopter are trained and have been conducting regular helicopter flights to Everest for almost one decade.

So, yes Everest Base Camp helicopter tour is Safe. Your safety will be our utmost helicopter.

Helicopter model: Helicopters of Nepal belong to model B3 which is a double-engine helicopter used in high-altitude flights. The Ariel 2D engine has seats for 5 people and carries a 500 kg weight.

Let us know if there is anything we can do to help you. Leave a comment below or send us an email.