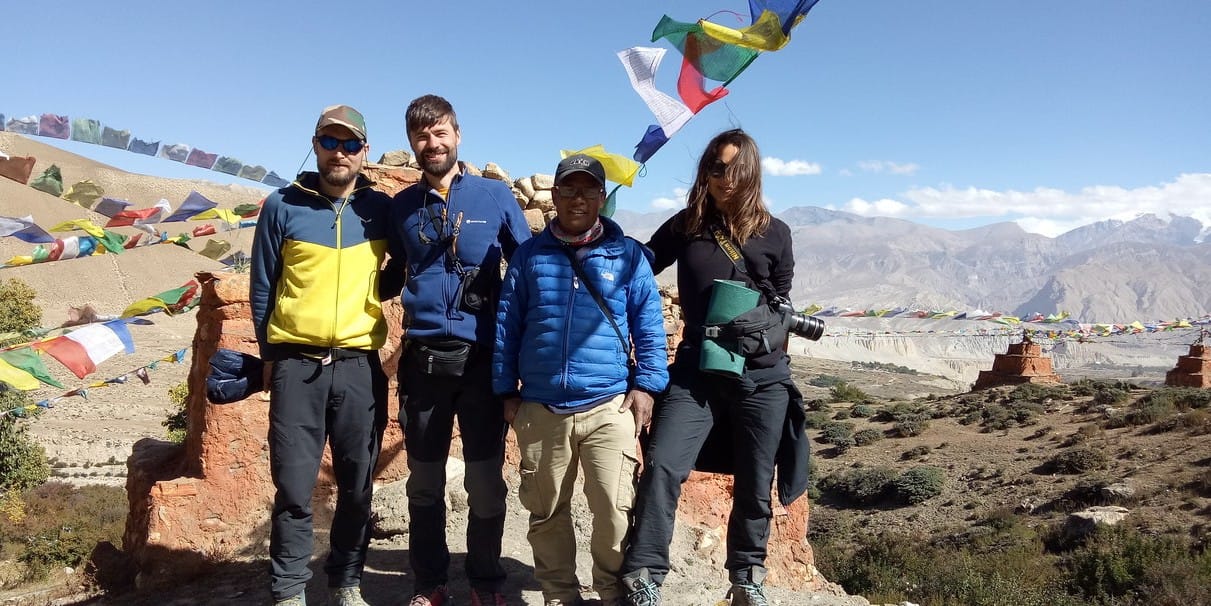 Trek to the Mustang region of Nepal is a rare privilege. Experiencing the true mountain people’s lifestyle who lived in the Trans-Himalayan arid region is comparable to no other trek. The mysterious and magnificent part of Mustang in the far north of Nepal is a vast, semi-arid valley with distinct desert-like characters. The valley filled with eroded colourful stratified rock formations fringed by snow-capped peaks lies right in the rain shadow of the Himalayas.

The ancient “Last Forbidden Kingdom” of Mustang has always been shrouded in mystery. Preserving its authentic Tibetan culture, this region remained in its original frame for many years. But Lower Mustang always welcomes a large number of visitors. Earlier, pilgrims used to set a journey of more than a month to get to the holy temple of Muktinath. Nowadays, this trek begins from the Jomsom village and takes you to Kagbeni and eventually to Muktinath before heading back to Marpha and then to Pokhara. You can get a flight from Jeep to Jomsom from Pokhara. This journey can be completed in 2 to 4 days.

Lower Mustang is itself filled with pristine beauty. The colourful vegetation, huge barren hills, and well-developed infrastructure make the journey fun and luxurious. And since you don’t need any special permit to enter this particular region, it’s also cheaper.

But the true beauty of Mustang lies deep into the valley, i.e. Upper Mustang.

The renowned Upper Mustang is the ultimate portal to the mysterious Buddhist kingdom, also called Lo. Mostly isolated and forbidden from the rest of the world, Mustang people evolve within their distinctive culture. In fact, until recent times, Mustang had their king, who the Nepal Government officially recognized.

The trek to this part of the country was closed to foreigners until 1992. Even now, Upper Mustang falls under the restricted region and demands a special permit for the trek. As you head north of Kagbeni, you need the restricted region permit that costs $500 per person for ten days. If you want to stay longer, the cost goes to $50/ day.

The Upper Mustang trek offers an adventurous itinerary of about two weeks. The spectacular trekking comprises deep ravines, magnificent snow-capped peaks, and the history, culture, and myth that blend perfectly with the local people. The ancient monasteries that appear out of nowhere, the traditional villages built of mud houses and mysterious cave dwellings high on the cliffs reflect the most exemplary architecture of humankind.

Thankfully, Mustang is one of the most accessible trekking destinations in Nepal. The Lower Mustang can be travelled in less than two days without the slightest pain in your shanks. At the same time, trekking to Upper Mustang is also relatively easy. The path is mainly levelled (except for some steep ascents). And you can also travel in a Jeep or a Private car in case of difficulty. The total Upper Mustang Trek distance is only about 125 km. The trekkers will be walking for less than 10 km for 6 hours per day. This means, that you will have enough time to rest, explore, and interact with the locals. No rush.

The maximum elevation is 3820m at Lo Manthang. Basically, you will be walking at a very low altitude in comparison to other classic trekking places in Nepal. Thus, the number of cases of altitude sickness is also low.

Anyone with sound health and determination can quickly achieve this Mustang trek. Even with zero experience of the high-altitude tour, you can accomplish this journey. But indeed, one solid approach to success is rehearsing- some physical training before the trek is very helpful.

Just like all other treks in Nepal, Mustang also offers teahouses on the trekking trail. Nowadays, every comfortable tea house has been built on either path. The Lower region, i.e. Jomsom, has some pretty luxurious hotels and restaurants. But as you move higher, you will notice that the hotels only provide primary facilities and good food. Such family-run tea houses expect them to eat in their own hotels. You can get different kinds of meals in a communal eating hall.

The incredible part of the Mustang is its climate condition. While most of Nepal’s trekking destinations are closed during Monsoon (June, July, and May), Mustang is ready to welcome its visitors. This place will instantly come on your radar during the summer months. Thanks to the Upper Mustang for being located in the rain shadow regions of Annapurnas. And the months of summer are also relatively quiet- you can have the best tea houses for yourself.

The month of May is vibrant in Mustang due to Tiji Festival. The three-day Tiji festival is celebrated on the premises of the Mustang’s palace. The locals and tourists from far and wide get to Lo Manthang to be a part of this festival.

And the other best season is Spring and Autumn. While Autumn is clear, warm and stable, Spring offers different kinds of fun. The distinct and colourful vegetation of Spring makes this region even more prodigious.

Lastly, there’s winter in Mustang. To be honest, winter at such an altitude can be harsh. Significantly, the heavy snowfall might block the path to Upper Mustang. But if the route is clear and you can carry enough warm clothes, the winter trek is also fun.

With the mountain terrain and the rich cultural legacy, Mustang village is the Himalayas ‘ finest treasure. During the Mustang tour, you get to explore this striking landscape, deep ravines, rocky cliffs, and majestic snowy peaks. Sounds amazing? Then contact us to book your tour to Mustang today.