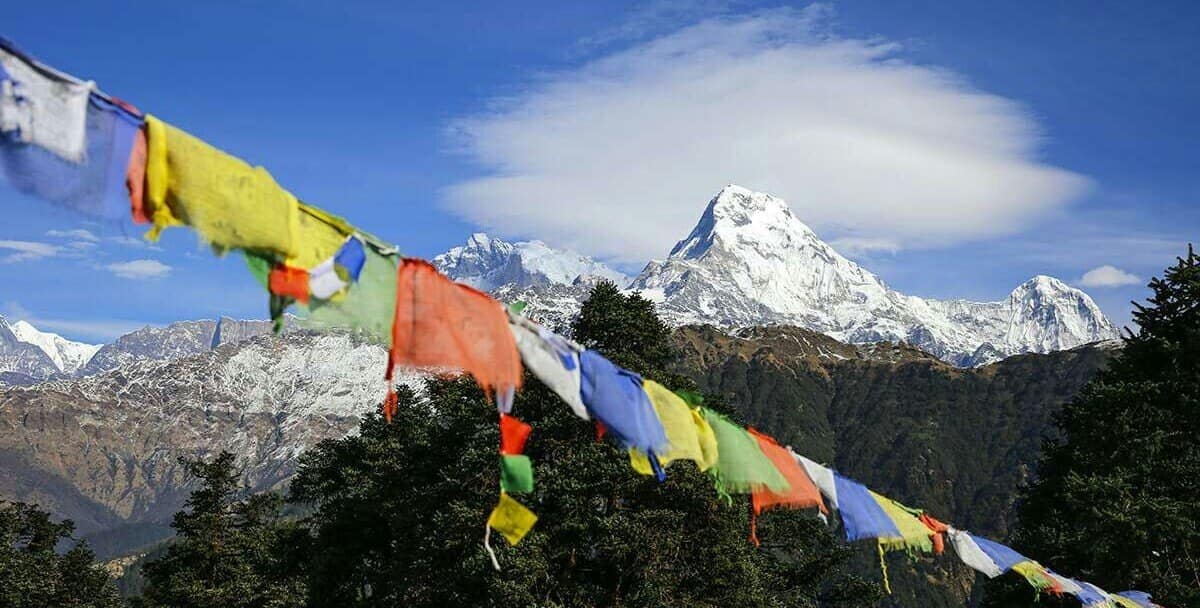 The Annapurna Conservation Area, located north _and west of Nepal, is the largest protected area in the country. within the boundaries lie the famous Annapurna one (8091m). It forms the watershed of the rivers like Kali Gandaki, Seti, and Marshyangdi. The area is globally recognized with various prestigious awards such as the Deutscher Rieseburo-Verband Award for Tourism and Environment; the tourism for Tomorrow-Asia Pacific, UNESCO’S Global 500, and many more.

The climate of the Annapurna

The area has two distinct climate regions. The cis-Himalayan region in the south receives annual precipitation of 3000mm and the trans -Himalayan region in the North receives less than 500mm. The region near Pokhara is known for the heaviest rainfall in the country The best time for trekking is between September and December and during spring from February to May. There is less rain in the mountains, especially in the rainshadow areas north of the range of Annapurna and Dhaulagiri. These areas are very dry throughout the year.

The area has an entire habitat gradient from sub-tropical sal forest to perennial snow harboring 28 ecosystems. The species include sal, schema, Castanopsis in the lower belt, oak laurel, blue pine, cypress, spruce, and fir in the middle belt, and birch rhododendron caragana and other alpine scrubs in the higher belt. So far, only 456 vascular plants have been recorded here including 38 orchid species and 9 rhododendron species. The reserve is home to 101 species of mammals 478 species of birds,41 species of reptiles, and 23 types of amphibians. The symbolic mammal species are snow leopard, musk deer, Tibetian argali and Tibetian wolf, wild ass, Tibetian antelope, and bird species found there are Golden eagle demoiselle crane and pheasant.

The landscape comprises mountain peaks, alpine pastures, trans-Himalayan valleys, forests, lakes, glaciers, rivers, caves, and cultivated lands. Along with Annapurna one in the Annapurna range, the virgin peak of Machhapuchhere(6993m) stands majestically in the area. The area offers the most fascinating routes for trekking. The 14 days Annapurna Circuit Trek takes the visitors right around the Annapurna range giving them an unforgettable experience of the cis-Himalayan ecosystem. It also takes the visitors across Thorung La Pass(5416m) Along the route are strategic viewpoints like the popular Poonhill above Ghorepani from where trekkers enjoy a fascinating panoramic view of the Annapurna and Dhaulagiri range of the North. Many of the trekking routes have a unique viewpoint for stunning views of the Himalayan Peak. The Machhapuchhre base camp can be reached in 3 to 4 days from Ghadruk and Annapurna sanctuary Base camp 3 hr from Machhapuchhre Base camp. There are several hot springs in the area .such as Tatopani along the trek from Poonhill down to Jomsom or Besisahar via Thorung – la to Muktinath then by bus 5 hr to Tatopani. And another at Jhinu towards Chhomrong.

The hot water springs are excellent places after a hard trek to relax and bathe. The Kali Gandaki river flows through the world’s deepest gorge the place is called Dana from Jomsom on the way to Tatopani and Tilicho (4919m) is one of the world’s highest places lakes. Another high-altitude lake Damodar Kund (4890m) is believed to be a source of the Kali Gandaki river. The area includes numerous settlements and enclaves habited by over 140000 people representing 10 ethnic groups ( Tibetian –Burman: Gurung, Thakali, Bhotia Ethnic Tibetian and Margaret and Indo- Aryan; Brahmin, Kshetri, Kami, Damaged, Sarki). The more culturally rich areas lie towards the north at Kagbeni from where one can be explored the Upper Mustang the once forbidden kingdom. or trek toward the Muktinath (nirvana god)temple, the Hindu pilgrimage site at a height of 3850m from sea level. A great example of tolerance in religion is because there is a Hindu temple as well as Buddhist monastery same places that take care of Buddhist people which we get after the Thorung la cross.

With the assistance of a guide, visitors can participate in a variety of activities depending upon the level of adventure and interest, visitors can go for trekking culture programs, wildlife/ birdwatching, village visit, and mountain biking popular on the Upper mustang route pony rides, etc.

The nearest town for the circuit trek is Besisahar some 175 km to the west. And well connected by road about 7 to 8 hr by bus visitor can hire private car 6 to 7 hr if no trafficking on the way and from there next day visitors can reserve private jeep to Dharapani 5 hr off-road then starts trek. For the Annapurna base camp, the nearest town is Pokhara 178 km from Kathmandu well connected by air and road from Kathmandu dependent upon visitors’ choice if visitors want to use the bus is 7 to 8 hr by aircraft 22 minutes. Access is the road from Pokhara to Naya pool or Phedi to start Annapurna Base Camp trek bus/taxi 130 minutes for Naya pool and 45 minutes for Phedi. For the upper mustang, trek Access is Road from Pokhara to Jomsom for 8 to 9 hr or by airline 25 minutes then continue to Kag Beni gateway for Upper Mustang or Lo Mangthang the Kingdom for forbidden.

Annapurna trek is one of the adventure and interest, for trekking Culture, Wildlife, Birdwatching, Village visit, Upper mustang biking, etc.

My Everest Trip-...Class Adventure!
A Complete Trekk...t Base Camp Trek