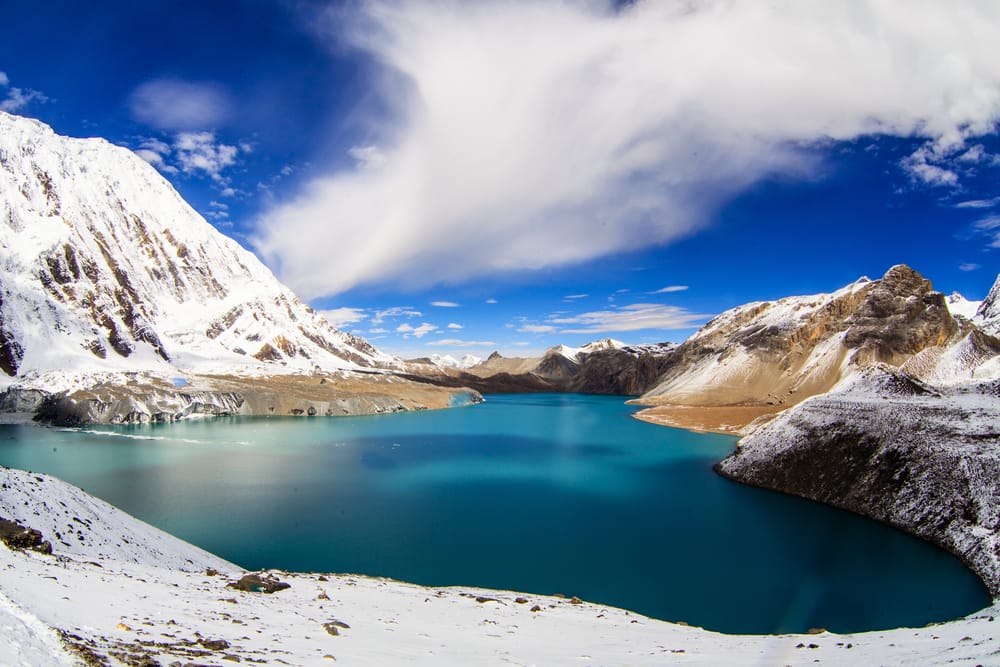 The high Himalayas of Nepal have not only made it a beautiful sightseeing destination but also blessed this tiny country with many natural wonders. And one of many such wonders the Himalayas have blessed Nepal with pristine blue place water lakes beautiful. Among many such beautiful glacier lakes of Nepal, Tilicho lake is one of the world’s highest-situated freshwater lake systems at 4949 m above sea level. It was one of Nepal’s best-kept secrets until the Tilicho Lake trek started to gain the attention of tourists around the world. Even then its natural and cultural bliss has been preserved well from the impact of modernization.

The natural and cultural significance of the Tilicho Lake trek has only made it more important. It is now one of the major highlights of the Annapurna circuit trek that has been very popular in Nepal for more than a century. This rejuvenating hike to Tilicho lake blesses us with an awesome view of Annapurna, Dhaulagiri, Machhapuchhre, Nilgiri, and Himchuli.

Situated in the Manang district of Nepal, Tilicho Lake lies just before the Annapurna Vista. The Tilocho lake distance from Manang is 15.7 km and if you calculate the aerial distance from Kathmandu, it is about 179 km in the northwest direction.

The pristine Blue Water of Tilicho comes from Tilicho Peak which lies just next to the famous Annapurna peak (World’s 10th highest peak). Tilicho peak, 7134 m was first discovered by a European team led by Maurice Herzog while they were looking for Annapurna. Later in the year 1978, the peak was the first client by French mountaineer Emanuel Schmutz from the Northwest side.

Tilicho Lake Trek is located on the Northern side of the peak and remains beautified by the water flowing out to Tilicho peak. The water flowing out of Annapurna Massif and Thorang Peak also accumulates here. This Glacier Lake in Nepal spreads over a length of 4 km (2.5 ni). The total area of Tilicho Lake is 1.853mi2 just. The average depth at the center of Tilicho Lake is 279 feet/ 85 M. The lake consists of 41 million US gallons of freshwater.

The exact data about how and when this glacier lake was formed is still unknown. However, it’s believed to be formed many thousands of years ago when the northern Bandarpunch massif and the southern Larkya peak had a glacier collapse. Tilicho Lake gained the attention of International tourists only a couple of decades back. However, this lake has always been a major pilgrimage site among the Hindu and Buddhist followers of Nepal and India.

Centuries ago, Tilicho Lake was mentioned in the famous Hindu mythology i.e. Ramayana. As per this Holy Hindu Book, Tilicho is a Kak Bhusundi Lake. This means that a Sage named Bhusundi shared in entire story and teaching of Ramayana with his fellow king Garuda in this lake. Garuda is known as the King of birds.

Since the lake was mentioned in Ramayana as a holy place, Hindu followers from India and Nepal used to make a very hard climb to the lake.

How to get to Tilicho Lake?

There’s no roadway getting you to Tilicho yet. You must trek for at least 2 days from the last transportation stop before you get to Tilicho Lake.

Route 2: A different and shorter route shall be driving to Shreekharka in a private bus and directly taking to the Tilicho Base Camp on the 2nd day. Then, on the 3rd day, you shall be staying in a hotel at Tilicho Lake.

Route 3: Some people also attempt to get to Tilicho Lake from the north by crossing a rather difficult route. This route comes from Jomsom and Thani Goan after crossing the path of MesoKanto La and Tilicho North pass which is called the Tourist pass. Unlike the previous paths, the route from the north has no tea houses for the stay. The last hotel is at Thani Gaon and the next one is at Tilicho Base Camp; so about two nights on the route would be a camping trek.

Alternative: Now, if the trekking feels to be hard, one can also take a helicopter flight directly to the Tilicho. Although the cost of hiring a Helicopter to Tilicho is high, it’s an equally luxurious and rewarding experience.

What can you see during Tilicho Lake Trek?

The Tilicho Lake Trek route offers so much more than the mere view of the lake. The Annapurna Circuit trek is a rewarding trek trail with so many exciting natural wonders to be encountered. And Tilicho Lake is the most significant part of the tour. The route moves along the Kaligandaki river, filling your walk with the melodious music of flowing water. Kaligandaki river also makes the world’s deepest George and blesses you with an interesting view. The river might also make some stunning waterfalls and exciting streams. You get to see some water life and suspension bridges in these rivers during the Tilicho Lake Trek map.

The towering views of the Himalayas seen from Tilicho Peak are:

While you are staying in the villages such as Pisang, Shreekharka, and Manang, you get to experience the vivid experience of the highland lifestyles on the trek. These Himalayas are homes of the Tamang and Magar people who have been perfectly adapted to the highland culture. The culture of these Himalayan people has been influenced by Tibetan Buddhism. The long-term impact of this religion has led to the formation of many white-washed monasteries, stupas, mani walls, and colorful prayer flags all around the trekking trail. Their unique way of life gives you a sense of peace and success.

Since our trekking trail lies in the Annapurna Conservation Area, we will also be witnessing rich flora and fauna within the route. This is Nepal’s largest conversation area spread over 7,629 7,629 km2. The Annapurna area stretches over the area of five districts i.e. Manang, Mustang, Kaski, Myagdi, and Lamjung. During this trek, you can witness 101 mammal species that include snow leopard, musk deer, wolf, langur monkey, Himalayan Yak, etc. If you are lucky, you can also spot Lynx, Leopard Cat, Himalayan Brown Bear, etc. Talking about birds, there are 6 Himalayan Pheasants found in the Annapurna area.

Talking about vegetation, there are 22 different forest types with 1226 plant species. 55 of these plant species are found nowhere else in the world. The major section of the forest is made of Sal, Oak, and Rhododendron trees.

Trekking to Tilicho Lake in a different season has its own Perks. Trekking is possible for about 9 months of the Year. Three months of winter i.e. December, January, and February are very difficult for Tilicho Trek due to the thick layer of snow surrounding all places above 2,500 m. Trekking from Manang to Tilicho in the snow can still be possible with the right preparation but it’s almost impossible to cross the Thorang La Pass.

There are two seasons we recommend for the trekkers depending upon what they are looking for. The best time for Tilicho Trek is autumn when the sky is clear and the temperature is also low. The views of the Himalayas range in the autumn are really distinct and exciting. September, October, and November are also times for celebrations and festivals in Nepal, making a perfect blend of culture. Spring is also an equally exciting month, however, the mountains might not always be visible. The views are often clear in the morning and gloomy in the evening. The major highlight of trekking in Spring is the colorful blooms of Rhododendrons in the lower region.

In Nepal, June, July, and August are known as the peak monsoon season. 15 to 20 days of each month are rainy, making it really hard to trek on the slippery rough trail. Also, the incidence of leeches and mosquitoes is high. Thus, many trekkers don’t prefer this summer trek. However, with the right guidance, trekking in June and July is possible.

How long is Tilicho Lake Trek?

You can see that Nepalese travel agencies are making the Tilicho Lake trek itinerary of over 15 days. The real question is, does it really take that long to trek to Tilicho Trek?

Firstly, you should know that many trekkers prefer to combine the Tilicho Lake visit with their Annapurna circuit trek which is about 15 days of a round trip around mount Annapurna. This Annapurna Circuit trek commences at Chame and takes you to Tilicho Lake via the Manang village. Then you cross the Thorang La Pass to get to Jomsom and fly to Pokhara. The entire Annapurna circuit trek takes 15 to 20 days, depending upon where you start the trek and how much you can walk.

However, you do not need to complete the entire Annapurna circuit to get to Tilicho. You can get to the Tilicho lake trek in 4 days from Kathmandu if you drive from Chame to Pisang. We have mentioned a different Tilicho route and the time to get there in the section above. In general, we can estimate that it takes about seven days to get to Tilicho Lake and back.

What is the mode of transportation for the Tilicho visit?

The trekkers usually land at International Airport in Kathmandu. From Kathmandu, you need to go to Besisahar which is the headquarters of the Lamjung district. A cheap public bus, comfortable tourist bus, or private jeeps are available to get to Besisahar. From Besisahar you can hire a jeep or share a public Jeep to starting point i.e. Pisang, Chame, or Shreekharka.

Beyond that point, you need to rely on your feet.

Tilicho trek itinerary can last from 5 days to 12 days, depending upon how much time you want to spend in this Highland. Since this is one of the remote reasons in Nepal, you need to carry everything you need during the trek.

Thankfully there are many tea houses along the route that offers you a comfortable stay for the night, so you don’t need to carry the camping essentials. Even then, you need to carry a sleeping bag and a lot of clothes.

Respective of the season, you need to carry warm and rainproof clothes for your Tilicho lake trek. Inner thermals, down jackets, trekking pants, and cotton T-shirts are compulsory. Make sure that your clothes are warm enough to protect you from freezing temperatures. The weather in Tilicho is unpredictable and the temperature might go up to minus 5 degrees Celsius at the night.

One of the most important things during the hike shall be your trekking boots. Along with comfortable high-quality trekking boots, you also need to carry slippers.

Since the Tilicho lake trek is not a technical climb, you will not need any kind of trekking gear. You will definitely need to carry two trekking poles. However, there’s no need for crampons and axes until it’s winter. If you have to cross the high passes in the winter, you might need some trekking gear. The list can be obtained from your guide at MyEveryTrip.

So, we have tried to cover almost everything you need to know before you Tilicho Lake Trek. You can check the MyEveryTrip Tilicho Trek itinerary here.

You can also comment or mail your general inquiry.