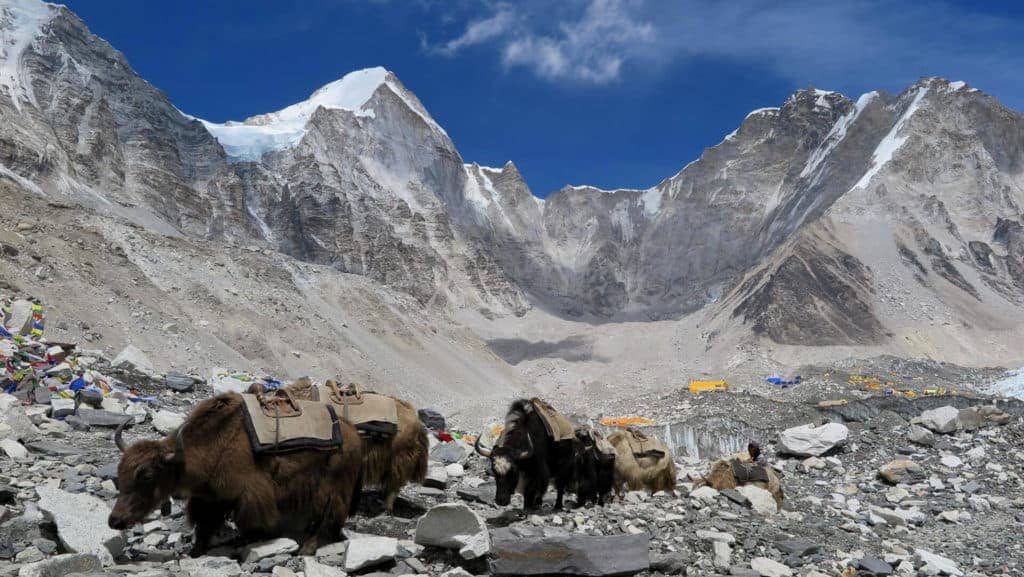 Everest base camp trek or High Himalayan Mountain Range Everest region lies on the border between Nepal and Tibet, Mt. Everest can one behold the splendor of this grand sentinel-like at world’s highest trek Everest Base Camp.

Almost everyone in the world has heard of this place of lore. And equally as many dreams of someday ascending through the towering pines, crossing thunderous rivers, and passing by solitary monasteries to visit and explore the base of the greatest mountain in the world. Those with an adventurous heart will feel it beat a little louder every time you think of trekking to Everest Base Camp. Maybe you have this dream? Perhaps, you’re ready to make it a reality.

The adventure begins with a flight from Kathmandu to Lukla. This will in itself make you feel like an explorer of old. Leaving behind the intensity of Kathmandu, you quickly escape to a world of snow, rock, and deep valleys of green. And as you approach the Lukla airstrip, your sense of excitement continues to grow because you know this is where you will begin your trek. The Lukla airstrip will not disappoint even the most seasoned traveler. It clings tightly to the side of the mountain as the skills of the seasoned pilot are revealed, landing just perfectly and gliding to a stop in front of the town of Lukla. Already high enough to be in the clouds at times, you start to see shimmering peaks far above, and deep valleys plummeting below.

Along your trek, you will come to the famous Namche Bazaar. This is where you will leave behind the forested valleys for good and enter the Khumbu region. You will also enter the Sagarmatha National Park (a UNESCO World Heritage Site). Namche Bazaar is the unofficial capital of Khumbu, and it is the land of the Sherpa people. The Sherpa are Tibetan in origin, and this shines through in the delicious food, art, culture, and language. Try local foods like Thukpa (a Tibetan noodle soup). This warming soup is great on a cold day. Or Rigi Kur (pancake made with potato) topped with female yak butter or cheese. The Sherpa trading market on Saturdays is a must-see for a small souvenir, and the Tibetan Medicine Museum displays this ancient system that still enjoys widespread popularity.

In a small village along your trek, you will come to a very famous monastery called Tengboche Monastery. Typical of this area, it is a Tibetan Buddhist monastery in which resides a Rinpoche (a special lama or monk) who is known to bestow blessings on pilgrims and trekkers alike going to Chomolungma (Mt Everest in Tibetan). It is the largest monastery in the Khumbu region and integral to the religion of the Sherpa people where they congregate for religious festivals, particularly Mani Rimdu. During this festival, somewhere between October and November, lamas or monks, dance in the courtyard amid clashing cymbals and undulating horns. This festival lasts for three days as bonfires fueled by cypress and yak butter burn throughout the night. The monastery is situated in a village of the same name, and here you will get incredible views of Ama Dablam towering high above the monastery and the village. Both Lhotse and Mt Everest can be seen in full view as well.

Kalapatthar is a must-do in your quest for Everest Base Camp. Along the trek, it is customary to stay in Gorakshep. From this outpost, you can climb a small knoll aptly named Kalapatthar which means black rock in Nepalese. Though a short hike, most don’t give it due respect and try to climb too fast. At Gorak Shep, all trekkers are still acclimatizing and should take their time with any extra hiking. But the effort is worth it! From the summit, you will see Mt Everest in its entirety, along with Nuptse, Changtse, and Lhotse. Make sure you leave Gorak Shep early enough in the morning to watch the sunrise behind Everest.

The trek has its triumphant climax in the hike to EBC (Everest Base Camp). It is a strenuous climb through the glacial moraines to the Everest Base Camp, however, to get to stand on the foot of the mighty Everest and have the skyline filled with the snow-capped Himalayas, is an experience of a lifetime. For some, Everest Base Camp is the destination, but for others, it is the starting point of a greater journey of conquering the highest peak in the world. During April and May, EBC is a hive of activity as climbers and guides go about the business of attempting to summit the top of the world, that is, Mount Everest.

Our company, My Everest Trip will help you achieve your lifelong dream of visiting this mythical realm full of beauty and splendor. Our years as a reputable company will ensure a seamless experience, and our trips are all designed and staffed by seasoned professionals. Bring your sense of adventure and curiosity for the unknown, and we will do the rest!

Mt. Everest lies between Nepal and Tibet, Everest Base camp offer to behold the splendor of mountain views and Sherpa culture with Everest Base Camp and other