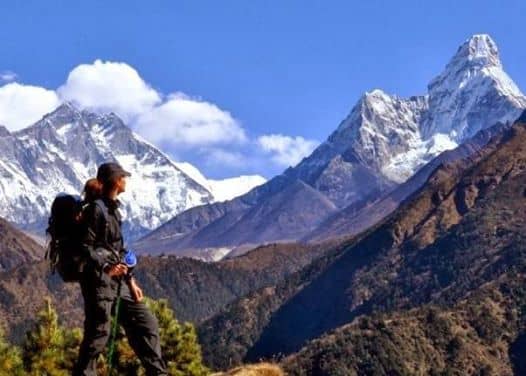 Are you planning to trek in Nepal? If Yes, My Everest Trip offers a variety of trekking and tour in the Nepal Himalayas. Most of the trekking trails are in remote areas of the city.  Trekking in Nepal offers awesome Himalayas, pristine nature, and landscapes untouched places full of Himalayans and culture.

Mustang is the isolated Annapurna region of Nepal. It is in the rain-shadow area lying in Between Annapurna and Dhaulagiri Himalayan ranges. It is also known as the Last Forbidden kingdom in the trans-Himalayan region. Tiji festival is the most popular festival in Mustang they are celebrated by ethnic people of the Mustang region. The culture and lifestyle are influenced by Tibet and it lies on the Tibetan border. Trekkers will explore the old monastery, caves, scenic beauties, and panoramic Himalayan views of Nilgiri, Annapurna, Dhaulagiri, and several other peaks.

Tsum valley is a recently opened trekking route in the Manaslu trekking region. If you love the wilderness with the Tibetan ethnic culture, we recommend doing this trek. It was opened in 2008 for tourists. This trek offers the Camping or Tea house where you experience a unique culture and festivals, villages, and the pristine Himalayas.

Upper Dolpo is the remote least visited trekking area of western Nepal. The unique Tibetan culture, Himalayan desert vistas, wildflowers and fauna, stunning mountain views and adventure journey is the major highlights of the trekking to Upper Dolpo. This is the region where the Oscar-nominated documentary film “Caravan” was soothed. To explore this virgin and unbeaten land, tourists requires to have a special permit. Trekking to this region is favorable all the time except in the extreme winter season as it lies in rain-shadow areas of Annapurna, Dhaulagiri, and Kanjiroba mountain ranges. Trekking from March to May and September to October are considered the best months.

It is the remote area trekking taking you to the base camp of the world’s third-highest mountain peak, Mt. Kanchenjunga (8586m) lying on the border of Eastern Nepal with India’s Sikkim. Trekking in Kanchenjunga Conservation Area, trekkers have the opportunity to walk through green lush rhododendron forests, alpine meadows, beautiful landscapes, and high-altitude wetlands. This is home to some endangered animals like snow leopards, red panda, clouded leopards, Assamese macaques, and Himalayan black bears.