Tilicho Lake Trekking is one of the popular trekking routes in the Annapurna Region as it lets you witness the scintillating Tilicho on a rather rugged terrain. Tilicho Lake, at an altitude of 4910 m, is the highest lake in the world for its size. The glacier melt on the northern slopes of Annapurna and Thorang Peak is collected in the Tilicho Lake. Tilicho lake trek takes you through some of the most beautiful places of the Annapurna region accompanied by a spectacular vista of the snow-capped mountains. If you are a person who enjoys being in close proximity to nature and loves to be greeted by warm smiling faces of the people, then you can always opt for Tilicho Lake Trekking.

The 15 days Tilicho Lake Trekking starts as you drive to Syange from Kathmandu witnessing various settlements, rivers, waterfalls, and varying landscape. You will cover places like Dharapani, Chame, Pisang, Manang and Besisahar, during this trek. You will also visit ancient Buddhist monasteries and explore the Gurung communities who have their distinct culture and dialect. The rugged but beautiful terrains, the green flora, the diverse fauna, the smiling and friendly faces of the people, the gigantic views of the mountains, glaciers and lakes, the diverse culture and beautiful monasteries, will lead you to the mesmerizing Tilicho Lake. The enchanting Tilicho Lake with its deep blue water shining against the snow-covered rocks is sure to take your breath away.  Along the way, you will have a breathtaking view of the Himalayas including Annapurna massif (8091m), Dhaulagiri (8167m), Gangapurna (7455m) and Lamjung Himal (6983m) among others. The trek will come to an end as you walk back to the beautiful village of Manang to join the Marsayangdi River trail. The best season to do the Tilicho Lake Trekking is from March to May and September to mid-December.

My Everest Trip provides you with experienced and knowledgeable guides, who has led many trekking groups throughout the country. We do not compromise on the quality of services in order to give you an unforgettable trekking experience.

Day 01: Arrival in Kathmandu (1300m/4264ft) then picked up from there to Hotel
We will give you a warm reception upon your arrival in Tribhuvan International Airport. You will then be escorted to your hotel. O/N at the hotel.

Day 02: Kathmandu: Sightseeing and Trek Preparation Early in the morning, you will be taken to four of the seven world heritage sites in Kathmandu—Swayambhunath, Kathmandu Durbar Square, Pashupatinath, and Boudhanath. Before dinner, you will be briefed about your trek by your guide. O/N at the hotel.

Day 03: Drive from Kathmandu to Syange (1100m/3608ft) After breakfast, you drive to Syange leaving Kathmandu behind. You pass alongside beautiful rivers, waterfalls, and varying landscape, en route to Syange. O/N in Syange.

Day 04: Trek from Syange to Dharapani (1960m/6430ft) You follow a zigzag trail, beside Marsayangdi River, until you cross a suspension bridge over Marsayangdi. Then, you walk uphill to Tal, the first village in Manang district, famous for its waterfalls. Passing through barley and potato fields, and pine forest, you reach Dharapani. O/N in Dharapani.

Day 05: Dharapani to Chame (2710m/8891ft) You continue to walk on the south bank of Marsayangdi River as you walk through pine, oak, hemlock, maple, and rhododendron forests and apple orchards on the way to Chame. You will follow a mule trail to reach Chame from where you can see a panoramic view of Annapurna II (7937m), Annapurna IV (7525m), and Lamjung Himal (6983m). O/N in Chame.

Day 06: Chame to Pisang (3300m/10824ft) You climb past Mani walls as you enter the buckwheat fields in Telekhu. You will also catch a glimpse of the tremendous Paungda Danda rock face as you ascend. You, then, continue the steep ascent towards Upper Marsayangdi through fir and pine forests. You will have a good view of Pisang Peak (6091m) and Annapurna II (7937m) when you arrive in Pisang. O/N in Pisang.

Day 07: Pisang to Manang (3500m/11482ft) You pass through picturesque villages painted with Mandalas, and trek through yak pasturelands and terraced farmlands. You will climb a steep ridge to Ngwal (3660m) for a stunning view of the Annapurna range and the Marsayangdi River Valley. O/N in Manang.

Day 08: Manang: Acclimatization day Today, you explore the famous Manang village as you acclimatize. Here, you will have a spectacular view of Gangapurna (7455m) as a backdrop to the traditional stone houses. You can also enjoy the local Manangi food. O/N in Manang.

Day 09: Manang to Siri Kharka (4060m/13,320ft) You descend from old Manang and reach Marsayangdi River passing by a Chorten. After crossing a suspension bridge at Jharsang Khola, you continue on the trail by the River until Siri Kharka. O/N in Siri Kharka.

Day 10: Siri Kharka to Tilicho Base Camp (4140m/13,583ft) You climb through steep trails passing monasteries and Chortens through juniper and sea buckthorn bushes. You cross few streams and follow a zigzag slope towards Tilicho Base Camp. O/N in the base camp.

Day 13: Manang to Pisang (3300 m/10824ft) You then descend back to Pisang leaving behind the Chortens, Mani walls, pine forests, and the Himalayas.  O/N in Pisang.

Day 14: Drive from Pisang to Kathmandu via Besisahar The travel back from Pisang passes through Besisahar which goes along the Marsayangdi River. Upon reaching Kathmandu, you can either rest or stroll around for souvenir shopping. O/N at the hotel.

Day 15: Final Departure Our team representative will drive you to Tribhuvan International Airport to connect you with your flight.

There are no fixed departure dates available for this trip you can choose your own dates.

If you already know who you would like to take your adventure with and would prefer to enjoy your ‘My Everest Trip’ experience with your own group of friends, then we’ve got good news! All of our trips are also available as private adventures! Our private adventure specialists are on hand to give you a quote or talk you through some of the different options that we offer.
So feel free to give us a call on +977 9851069558 or Email us at [email protected]

If you have already travelled with us and want to share your story and experiences to the world please send us your experiences by cliking the button below:

These reviews are from the travellers who have travelled with us previously.

My Everest Trip was recommended to me by distant relatives and searching the website I saw so many treks to choose from. Puru was great assistance helping me to choose a trek suitable for me and my friends. We are experienced trekkers, but had never been to Nepal, so this was obvious choice.

After a long flight to Kathmandu it was nice to be met by a friendly staff member in the airport and driven to our hotel.  I also appreciate that day two was planned with sightseeing and preparation for the trek as it gave us time to recover from our flight and get the sense of the country and it was nice to meet our guide, Yam, for a briefing before we set of the next morning.

The Tilicho Lake trek is a great experience and being surrounded by friendly people made this the best trek I ever did and makes me regret I did not go to Nepal earlier. Yam is a super guide and he added so much to our days in the Himalayas, this would not have been the same without him. He made sure all the safety precautions were taken so everybody was safe always.  Since everything was arranged in advance we did not have to worry about where to sleep or our meals and we could just enjoy our trek in the magnificent Annapurna region.

As soon as I get the chance I will return to Nepal for another adventure and I will definitely book with Puru again. 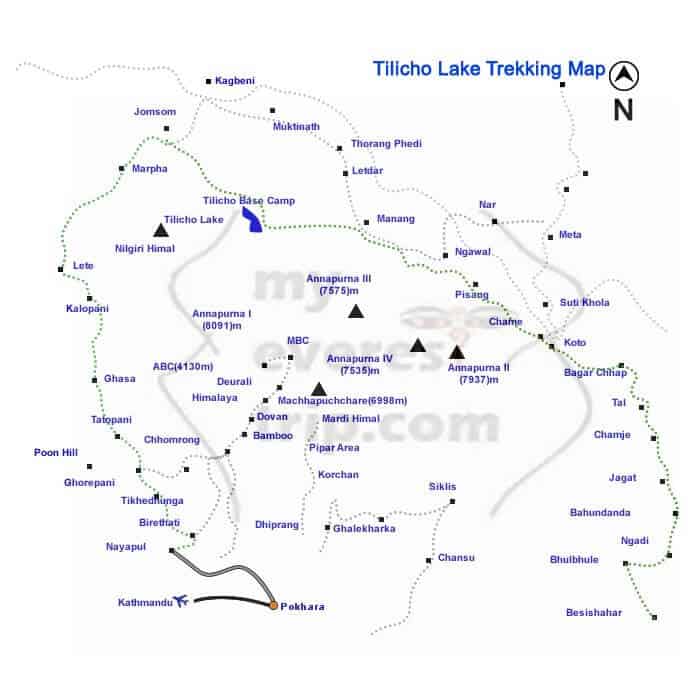 We are your ultimate adventure partner.

My Everest Trip is a reliable, Eco-friendly and experienced tour company in Nepal – so if you’re looking for the ultimate Himalayan adventure, you’ve come to the right place. Our seasoned guides offer mountain trekking and peak climbing across Nepal, Bhutan and Tibet – as well as a myriad of jungle safaris, sightseeing, bungee jumping, cycling, and paragliding packages. So to learn more about us click below and choose us as your ultimate adventure partner! Learn More About Us

Why Book With Us

Annapurna Base Camp (ABC) trek is one of the most legendary treks in the...

The Annapurna Circuit Trek is one of the most well-known treks in the world....

Kopra Ridge Trekking is one of the most alluring and best short trekking routes in...

Chulu East Peak Climbing is one of the most popular adventurous peak routes around the...

Ghorepani Poon Hill trek is one of the most popular trails for its traditional...

Jomsom Muktinath Trek takes you to both the driest terrain and the lush rhododendron...

Mardi Himal Trek is one of the newest treks to be opened in the...

Pisang Peak Climbing is one of the most adventurous trekking peaks in the Annapurna region...

The Royal Trek is the easiest and the shortest trek in the Annapurna Region. This treks...

Langtang Valley Trek : To the Valley Of Glaciers!

Langtang Valley is one of the most distinct and beautiful destinations to trek in Nepal. Also known as the Valley of Glaciers, the region not only stands out for its natural beauty but also for its easy accessibility.